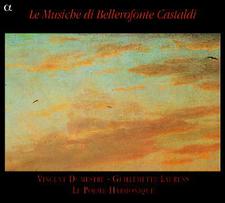 Bellerofonte Castaldi was an epicurean and a free spirit. An independent musician, he consistently chose freedom over serving in a princely court: ‘I admire the courts and praise them from afar,’ he wrote, ‘but I have never had the heart to become part of them.’ His music was never written to please a patron. Castaldi’s artistic choices led to a rich musical output but proved his undoing. He died alone, deeply in debt and unable to feed his family, on 27 September 1649, leaving behind an invaluable musical opus including two printed volumes and a number of pieces that are now part of the Modena manuscript, the main source used for this recording.