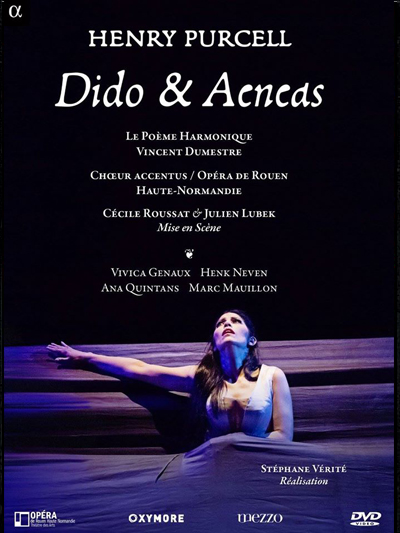 A widowed queen falls into despair after she is abandoned by her lover. Making this drama accessible to audiences today, without betraying the poetic language of Tate and Purcell, is no easy task. What we call desire, conflict and emotion was expressed in the 17th century through mind-blowing metaphors, and magical or diabolical interventions. Guiding us through a mythological maze, Cécile Roussat and Julien Lubeck free the life force of this imagination by filling the stage with outlandish creatures who bring the story to life. Acrobats and dancers roam or fly over the set in the form of sea monsters, ethereal divinities and forest spirits. The sea, a constant presence, swathes in a single element the passion of the protagonists, the fury of the evil powers, the peace of a lover’s rest, and the despair that overwhelms the queen. But this is not the only stage on which the characters come to life. From the orchestra pit, Vincent Dumestre revives the echoes of lyrical tragedy and the Elizabethan mask. The majesty of Lully and the melancholy of Dowland haunt a musical framework marked by improvisation techniques inherited from the lute tradition. Dances taken from other scores by Purcell and his contemporaries complete these entertaining episodes, which help mirror the work’s sheer sparkle. Set against this background, the singers and musicians of the Poème Harmonique compete with zeal and imagination in a performance that’s as hectic as it is unforgettable.

Created in Spring 2014 at the Opéra de Rouen, and performed again at the Opéra Royal de Versailles and the Palais des Beaux-Arts de Bruxelles, this production has been extremely well received by critics and audiences alike. Reconciling the imaginative world of the 17th century with contemporary sensibilities, it is regularly praised for its brilliance and broad appeal.